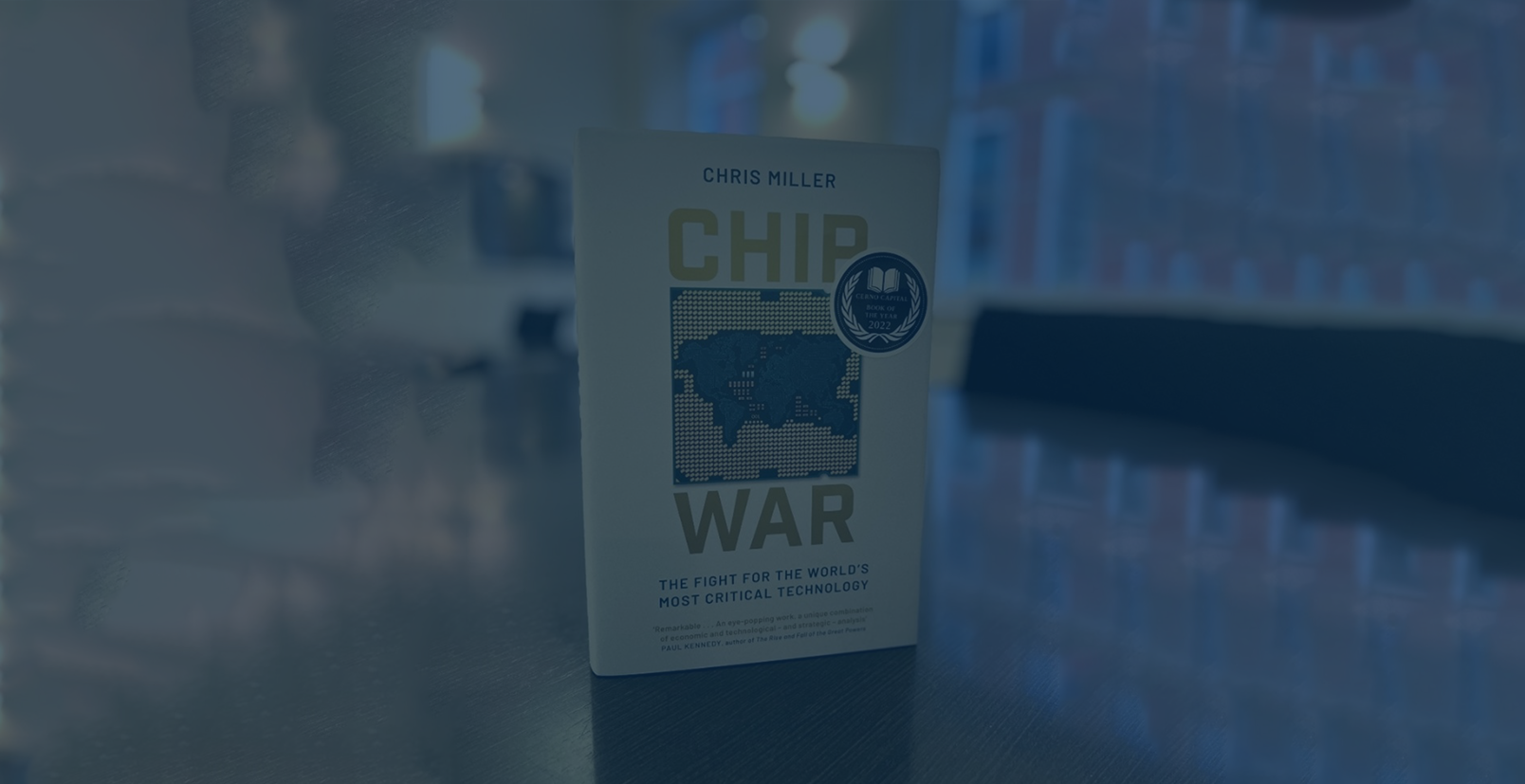 China’s import of microchips is larger, by value, than Saudi Arabia’s global export of oil. ASML’s laser component sets are assembled by a German company, Trumpf. Each of these contains 457,329 components.

These two remarkable facts, in a book full of many, indicate both the complexity and importance of having some basic knowledge of the global microchip industry. Chris Miller’s book is an excellent primer of the history of microchip development, beginning roughly in 1955 with the founding of Shockley Semiconductor and bringing us up to the current day.

The book’s title is ambiguous as it could both be read to cover the historic war between innovative companies: Shockley, Fairchild, Texas Instruments followed by SONY, Micron, Intel, Samsung and TSMC or indeed the suggestion that future wars, cold and hot, could be fought to secure supplies of equipment, fabs and people. In a way, one of these wars has already begun with the US instituting an export ban of high-end technology to the US and tightening this further by prohibiting US nationals from working in China’s chip sector.

Chris Miller traces the successes and the failures over the industries past 70 years through its principals. The excellent access he has been given has allowed him to draw compelling portraits of the industry’s American founders and its Asian developers. We learn, through anecdote about the driven ways of William Shockley, Bob Noyce, Gordon Moore, Andy Grove, Akio Morita, Morris Chang and Lee-Byung-Chul and the corporations they founded.

It is indisputable is that semiconductors have amply fulfilled the visions of its engineer founders and have become fully integrated in our personal devices our motor cars and our governments’ weapons systems.

It is not often the case that the future aligns with founders’ visions as they have so wholly done in the case of semiconductors. What remains mutable and much harder to predict is the individual fortunes of corporations in the industry that have a tendency to fly high and then find their edge dissipate. Part of this arc can be described by understanding the development pattern of Asia post WWII. America’s support of a demilitarised Japan provided the room for SONY to prosper. The UK’s governance of Hong Kong and plentiful cheap labour provided an early home for US firm’s first Asian outposts. As South Korea began to move away from military dictatorships, opportunities were granted to the first generation of chaebol founders. Taiwan has provided the purest example of state-private collaboration under the drive of the peripatetic Morris Chang. Having lived and worked in China, Hong Kong and the US, Chang cracked the nut of the fab company which could be everybody’s supplier. That company is TSMC.

Then there is China – a country with indisputable and self-declared ambitions in microchips that dates back to the rule of Mao. Mao’s tunnel vision could not extend beyond small scale, proletariat home-based ventures. It is estimated that US$100bn has been expended in developing China’s microchip industry. That money has been spent without attaining leadership in the key areas. Whilst Premier Xi sounds just like President Biden when they urge on their domestic industries, the sheer size of China and inter-regional competition for investment and headlines has counted against it.

Chris Miller’s book describes what he terms ‘choke-points’ in the industry that have arisen as a result of its jagged path to today. These choke points became more evident during COVID and in the supply shortages that followed. Oil and gas, to compare another critical global industry, experience less choking, being a mined and fungible product.

The only reliable prediction we would wish to make is that, on a 10 year view, these choke points will have lessened. However, it is possible to both believe this and to doubt how the formidable competitive advantages of Korean and Taiwanese companies will wane.

The article that follows, written by Michael Flitton, goes into more depth about this issue.